It is often said to be ‘Centeranian life.’ The human lifespan is continuing to increase and according to the data from the National Statistical Office in 2018, the average life expectancy of Korea was 82.7 years old. However, from among this, the ‘healthspan’ which means ‘period of maintaining a healthy life without illness or injury’ is getting shorter. Now, we need to be concerned about not just how long we live, but how healthy we live.

The Advent of Healthcare 3.0 Era, the Key is Healthy Life!

During the 18th century through the early 20th century, which was the healthcare 1.0 era, the main goal was to prevent epidemics. After the European Industrial Revolution, many of the population flowed into the city and the lack of infrastructure resulted in many epidemics so they focused on developing treatments for the whole nation. In addition, they organized city infrastructures such as water and sewage and wastewater treatment which led to the reduction effect of the mortality rate of epidemics.

Healthcare 2.0 era could be considered as an era of disease treatment. As it entered the 20th century, the medical industry such as pharmaceuticals, devices, and services was kicking in due to the development of the global economy and development of industries. As many patients overcame diseases, the mortality rate reduced and it led to the increase of life expectancy.

As healthcare 3.0 era was introduced from the 21st century, the paradigm of “Prevention” and “health care” have changed based on technological innovation. Now, the main goal is to live a healthy life through disease prevention and management. Beyond the scope of existing disease prevention, through the linkage of daily management, customized treatment, pharmaceuticals, diagnosis devices, and services, everyone is now able to manage their health with customized care. The main health indicator of the healthcare 3.0 era has become “healthspan.”

Smart Step of DRAX that will lead the Healthcare 3.0 Era

You need various efforts to live long healthily. Among these, exercise is an important effort. In particular, it is important to work out your muscles and do aerobic exercise in a balanced way. This will prevent bones and muscular strength from weakening.

As we are now in the healthcare 3.0 era, DRAX also started an innovative leap.

Not only we have various types of treadmill such as the New Redon series equipped with Speedsync, the world’s first automatic speed adjustment, and the world’s second hiking simulation fitness equipment, My Mountain, we have completed our aerobic fitness equipment line-up with DRAX’s technology and design know-how, which include bike that can control the exercise intensity up to 25 levels through subdivided load control and elliptical that enables full-body exercise.

In addition, we have introduced various muscular strength fitness equipment including Well-Live Pro that tells you the exercise method through a smart system and free-weight series that has an ergonomic and sophisticated design. In particular, when you are doing a muscular strength exercise, the equipment might wobble due to the strong force which will lead to an injury. DRAX used a high precision process method to increase the structure’s level of completion and made the fitness equipment that supports steadily. 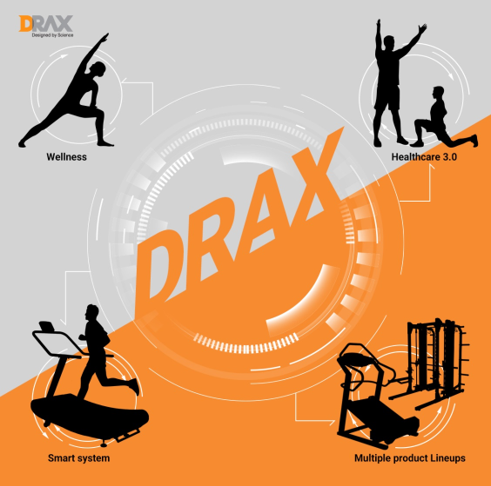 DRAX established a linkage system with exercise in various fields such as healthcare, digital, mobile, medical, and entertainment through linking various software to the hardware (fitness equipment).

A system that measures cardiorespiratory fitness while you are running on the treadmill determines individual’s physical ability and helps to configure the exercise program accordingly. We also offer an exercise method that can be enjoyable by linking the screen game and non-powered treadmill to let you feel like you are in a real running competition.

We did not neglect to provide a smart exercise method with increased efficiency and an optimized method for each person. A smart system that allows people to know about the usage method of the fitness equipment and prescribes customized exercise method will be routinized and systematized.

DRAX’s step that matches the healthcare 3.0 era! DRAX will not stop its effort to provide a healthier life. DRAX has been constantly striving to develop precise fitness equipment and various systems! Please look forward to it!